Skip to content
“The Improvement and Development of the Territory along Taras Shevchenko Embankment of the Moskva River Taking into Account the Existing Natural Complex” Our aim was to transform the today unappealing Taras Shevchenko embankment into a lane for pedestrians and bicycles with the complex development of the river bank territories so that some elements of tourist infrastructure could also be included. The bank areas are considered as the main value so the green plate organizing the territory is composed as an arrangement of overview platforms towards “Moscow City” and Moskva river. Fountains and small hills in the built environment can become part of the landscape park thus extending a green strip along the Moskva river on both sides of “Moscow 2000” starting from the Dorogomilovsky highway bridge stretching approximately to the Ukrainsky Boulevard. Our objective was to turn the embankment – previously only used by cars – into a new city landmark, thereby bringing life to the “deserted” but valuable area. The solution is to turn the Taras Shevchenko embankment into a pedestrian and cycling route that starts at Ukrainsky Boulevard and replace the road with a landscape park providing numerous sport features. The traffic is lead into a tunnel serving all the newequipment and infrastructural arrangements – like yacht-club, hotel, water world, full-court gym – with underground parking plates providing an easy access for the maintenance of technical services, as well as the required number of parking places for cars and tourist buses, without disturbing the life of existing residential blocks. None of the designed buildings are covering the overviews fromthe lower floors of the residential buildings located in the area as they are all composed under the main green plate along the river – permeated and lit with numerous atriums. The transformed embankment should be used as a year-round landscape park in the centre of Moscow. During summertime the multilevel layout can be used for walking, cycling or roller-skating while in winter it is a perfect setup for sledding, skating or ski-running. The central design element of the embankment is the green plate with pedestrian and cycling waves creating an artificial landscape. The lookout point can be developed into an open-air stage to host also cultural programs and could provide shelter fromthe rain. At the lookout-point, which is positioned at the East-end of site Nr.2, pavilions are used as cafes, stores and bike rentals and build a great starting point for outdoor recreational activities. We have a proper leisure zone here in vision with beach atmosphere, showers and bars. The wooden beach with its diversely angled surface provides visitors with space to lie down on. Since swimming in the River Moskva is not advisable, we suggest to use showers for refreshing. The building envelop of the full-court gym linked to the path can also be used as outdoor climbing wall, coloring the varieties of sporting activities offered inside. The fountain zone is also an important element of the new park with a fountain jet, with dynamic lighting. The park zone is divided by Moscow 2000: when planning the zones, the view from the other bank was also considered. At the West-end point of the promenade the landing stage for tourist boats is located – linked directly to the yacht-club – which can provide a new dimension for accessing the cultural experience of the Fomenko theatre, or the relaxing atmosphere of the hotel with its excellent panorama to the river. The water world with its wellness compartment is connected to the hotel but is also open to the public. The pools have special panoramic arrangements making benefit fromthe special location. By the development of the main concept a lively district with mixed use was created. The hotel with about 120 rooms, conferencing, restaurant, public spaces is combined with Indoor- and out-door pools, spa with sauna landscape and an underground car park. The complex stressing horizontally under the naturally green surface but not just like dam – the bulk is loosened up by diverse see-throughs, dinamically arranged atriums or accents in height, creating an inspiring topography along the river bank. The out-door pools can be extended by some swimming platforms – including smaller pools and surface for sun bathing. 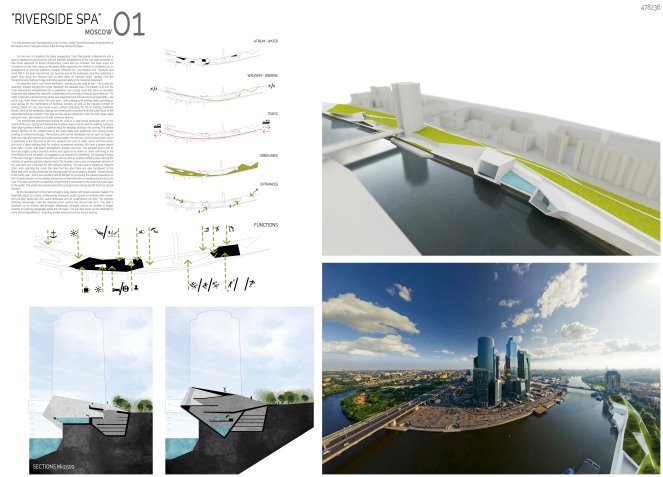